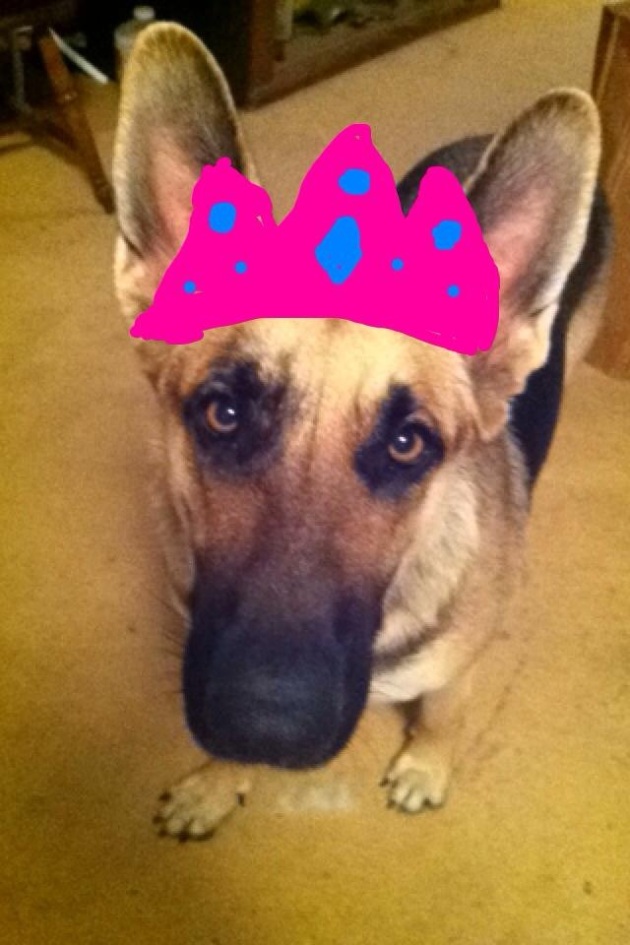 This is Doggie. Her real name was Princess Allie and she belonged to my daughter and my heart. Someone ran over her Friday morning. I was driving back from Ohio (work) when I got the call from my daughter. I cannot begin to explain what a miserable, long drive that became in just a matter of seconds. I still don’t know how someone could have run over her. Maybe she ran in front of them, I don’t know. What I do know is that the grief runs deep and it hasn’t let up much. I am grateful that I don’t know who killed her. It would not bode well for them if I knew.

I work from home a lot so doggie and I knew each other pretty good. We had rituals. She made me laugh more than I have in a long time. She was nothing but lovable.

She could not be disciplined in the conventional sense. If we tried she would end up in our lap.

Her food bowl always had to be full. She laid down with her paws on either side of the bowl and ate a hole all the way to the bottom and would come get me to at least shake it and level it out… but most times it was just that she wanted the bowl to be full. For that she had the nickname of Miss Piggy.

She would come stick her nose under the armrest of my desk chair and work her way under my desk if I tried to ignore her when she wanted something. Sometimes she wanted to go outside. Sometimes it was just the food bowl. Many times I have walked to the back door only to turn around and see her laying down looking at me.

When I came home from a trip I could just about always count on finding a chew bone buried in my pillows. This time it had fallen to the floor. If she was outside she always greeted me with her happy dance when I parked. She would stick her nose on the door knob and lick my hand as I tried to unlock the door. I gave up on trying to teach her not to do that. If she was too muddy to let inside I would tell her no. She eventually learned that no meant no but in true Allie fashion she would lay down in front of the door so that you had to step over her to get into the house. All things were on her terms…

My first night home I heard her bark and I went to the door to let her in. She never came. Eventually I realized that she wouldn’t. I still go to the door… just in case. But she’s buried under a cedar and she won’t come to the door anymore. I know that. But I look anyway because I don’t know what else to do.

I’ve researched cloning but it’s $100k and it won’t bring her back. I’ve exhausted all hope and even science. All that is left is grief.

This is as much about Doggie as it is about the grief process. I’ve come to believe that grief is the result of how much influence the loved one had on your life. The length and depth of the grieving cycle is an indicator of how deeply they got into your soul in life. This has and will be a long, long grief cycle. They deserve the grief that we suffer with because of the joy that they brought to us in life. Doggie is loved and always will be.

I was born in Odessa, Texas and raised everywhere else. I have four grown children and four grandsons and a granddaughter that I love dearly. I love photography. I've been making images since I was 8. I enjoy restoring vintage electronics. I love being around other photographers. I enjoy sharing what little I know about the craft of photography with anyone that is interested. Life is good.
View all posts by Michael Lloyd →
This entry was posted in Uncategorized. Bookmark the permalink.